LOVE ME, BITE ME, the second book in the LEGENDS OF THE GOLDENS SERIES is in PRE-ORDER for 99 cents at Amazon. It’s the continuing story of Chastity (from A FAR FAR BETTER THING free on Kindle and Nook), the human/Golden hybrid that has the Golden community on edge. She’s fallen for her high school quarterback, who has decided to become officially changed into a vampire at San Diego’s Comic-Con. If she bonds with him before that, she might save his soul, but poor Chastity doesn’t even know how to kiss. So she finds a Zander of the future to practice bond on. Unfortunately practice Zander falls for her and has to compete with her real Zander of his past.

Chastity also appears in subsequent books in the series published by Soul Mate: FORBIDDEN PLAYGROUND and DANCING DRAGONS. She’s the wise Golden elder aunt to her nieces and nephews, the main characters in those books. And she appears prominently with Zander in DANCING DRAGONS.

Now for the cover reveal: 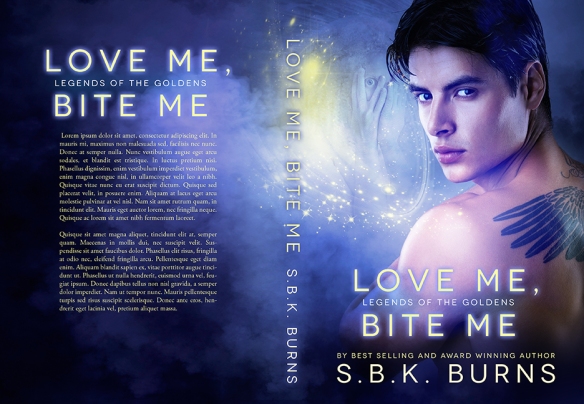 A FAR FAR BETTER THING prequel novella to the offbeat and quirky LEGENDS OF THE GOLDENS SERIES of sci-fi, paranormal psychic romances continues to be downloaded and in Amazon’s Best Seller Ranking for several months.

FREE: Please download this introduction to the series where the first Golden/human hybrid, Chastity, is naturally born and creates havoc within the Golden community.

It’s that time again for the California Dreamin’ Conference. The Los Angeles, East Valley, and San Diego Chapters of Romance Writers of America are sponsoring an intimate writer’s conference at the end of March in Brea, California.

And, coming soon, announcing a spiffy new promotion for my Legends of the Goldens Series where new adult coming-of-age, diversity, and vampire humor unite.

March 2014 Bewitching Blog Tour for the first two books in the sci-fi romance series Legends of the Goldens by S.B.K. Burns

For ten comments posted and over (by the end of March) one name will be drawn to receive a $50 Amazon Gift Card (at each website). (less than 10 comments a $25 Gift Card) OVER TEN CHANCES TO WIN

Best Comments will receive the entire Legends of The Goldens Series—FREE.

Please stop by at one of the following addresses (or all) and leave your brief comments.

Remember, it’s your enthusiasm that gets my books into readers’ hands.

1. Fang-tastic Books: post about My Kinda Guy: a silly look at writing about the beta hero.

2. Shut Up And Read: Interview of the author about her reading/writing life.

Roxanne’s Realm: post about the Amazon Jungle: a possible use of numbers to choose your next editor or agent to be queried.

Be on the lookout on Friday for a listing of all blog posts during the first week of touring my Legends of the Goldens Series.

Also, Dancing Dragons will be released around March 22, so look for its buy page on Amazon at that time.

I’m conducting a raffle at each blog stop for my series this month, so once I post the links to the blogs on Friday, you can go there and comment. By the end of the month, I’ll choose one person [per blog] to get an Amazon Gift Card [if less than 10 comments, then a $25 card, if more, then a $50 card).

Also, at the end of March, the entire series, including the Forbidden Playground comic, will be awarded to the best contributors/posts from all the blogs.

In celebration of Soul Mate’s March 22 release of Dancing Dragons, book two in The Legends of the Goldens Series, they’ll be two weeks of Bewitching Blog Tours with prizes: Amazon gift certificates and the entire Legends of the Goldens Series plus comic—FREE to some who post comments. To qualify, visit the blogs below for more information on prizes.